Character Sketches; a Creative piece that reflects the work of Christ, in His people

(Some overflow from my  heart and life)

We all wear faces,

Our hearts are hidden, from different places,

Scales on our eyes, we can not see,

All the beauty that is there,

God knows it all, not only traces,

That old man and old woman who bring their grandkids to church, teach and instill, to love what is His, they survived, healed and grew, when she left him with the children and he didn’t know what to do.  By God’s grace they did reconcile.  He admitted fault and flaw too.  For the grandkids they did better than for their own kids they could do.

The handsome gent alone, who makes it a point to get up, get dressed, his wife and son still at home.  He comes to church faithfully, desiring to make up for the years he rebelled or didn’t care, for the years and time wasted.  He now prays daily, for the time that his wife and only surviving son will join him in church pew.

The mother who survived extreme dysfunction and abuse, of sick parent figures, now she has broken the bad cycle and gives her children what she never ever had, and she not only makes it to church with her clan, but she lives what she teaches and what she teaches, reaches, generations and in-laws.  God grew a ministry through her.

There is the sister who got up early and did meal prep, early before service, so she could bless some kinfolk.  She wishes they would join her, but trusts the Holy Spirit to stir and provoke.  She yearned for the gathering of saints before she awoke.

And there is the man who found the Lord behind the barn as he cried out on his knees.  He wondered why loneliness  and failure had been his plot, but when Jesus moved in, he was surprised what he got.  Now he delights to read His Bible, pray, smile, shake hands and nod.  God is preparing Him, for His destiny.  He will be used in a wonderful way, for kingdom purposes, because he is willing this way.

The single lady who adopted the friend’s child, knowing God would help her along.  Did you see tears fall, when she heard that song?  So many cares.  Such a job to do alone, yet in her heart she knows that she knows, the Maker, the Giver, the Savior,  the way.  She trusts in Him, through dark valleys and hill tops in day.

The 40 year old man, beaming today, because his wife of 22 years is beside him in church for the first time in his life.  Now in His heart he dreams of growth, and ministry, serving with her by his side…

The man who is alone, but never missed a church service, though his wife left years ago.  And he never talks bad about her, but he smiles and talks of God and His word.  Now to the worldly folks this may seem strange or absurd, but to the fellowship of sold out for Christ, this is understandable, and this brother is appreciated and respected, his counsel sought.  He understands his value, and others that were bought. (Jesus died for sinners.)

The mother of 6, who adopted some, wonders if she was right, if she is good enough, but she does her best.  The wee ones hear of God and see it too, in how their mother lives, what she says and what she does do.  They will grow up and bless her.  In old age will be her reward, for being faithful and doing her best.  She changed lives with her work and her dedication and faith, and generations will be blessed because of God in her.

The old man who was crying.  He is truthfully a little sad, and a little bit glad.  He was told that he has a terminal condition.  He has lived a very long and good life.  Today he is enjoying the beautiful singing of the saints.  His wife was once in the choir.  He is looking forward to seeing her again, and meeting Jesus soon.

The young man who is in services every Wednesday, and Sunday twice, because the power of prayers by his mother and sister, brought him through the valley…

The academic, who was a doubter until matched intelligence  sparred and shared books.  Then she learned a powerful real God is there….. when she looks (with eyes opened by the Holy Spirit).  Now she has the same passion and zeal for science, the seen and discovered, but also for the unseen and pursuits of the spirit.

There is the teacher who teaches the real school curriculum but believes that the most important part of her job is the opportunity to know her students, pray for her students, and on occasion, share personal faith friend to friend.

Let’s call above, fiction based on what I have known in life.

God’s people are rich with history and strength, and my preferred company.  I urge you to assemble and get to know them in a congregation near you.

I would DELIGHT for  you to tell me, in the comments below of a fictional  character or family that you know of.

If you missed the rest of Telling Hearts January series, catch it here >Happy New Year, 2019, from Telling Hearts; introducing the January Series 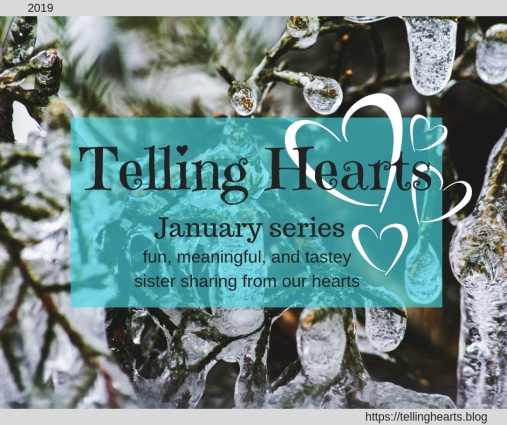 If you enjoy short pieces of Christian fiction, and Christian poetry, I invite you to view more from me, at my first blog, Grandma Mary Martha:

One of my favorite poems for Christ: His Grace is Sufficient

One of my short fiction pieces (actually based on truth):Circle of Life…